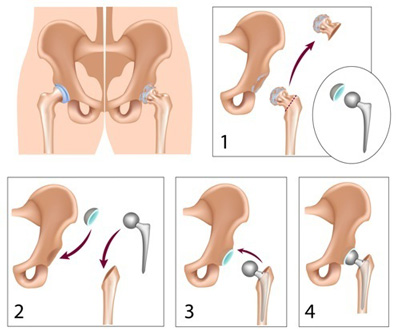 Over time, the impact of joint disease, arthritis, or excessive body weight can erode the hip joint.

According to the American Academy of Orthopaedic Surgeons, each year in the United States, about 193,000 hip replacements are performed. With the aging of the baby boom generation, that number is expected to grow as this large segment of the population moves into their 50s and 60s. It is estimated that more than 500,000 knee and hip replacements will be done each year by 2040. Also, the joint implant technology involved is improving, enabling the artificial joint to last longer.

The surgery itself, lasting between two to three hours, is performed on those who experience the chronic and debilitating effects of hip disease. An incision is made in the beauty of the patient. The surgeon then removes the diseased bone and cartilage and fits the prosthesis into the joint. The prosthesis is inserted and the incision is sutured.

Young people are not always good candidates for hip replacement. In fact, in the United States, 65 percent of hip replacements are given to those over the age of 65. It is also not recommended for the extremely obese, those with a terminal illness, those with nerve disease, those lacking ample skin around the hip.

This is the first type of hip prosthesis developed. Essentially, the prosthesis is secured to the hip with a cement adhesive. Over time the cement will erode and need to be replaced. Usually these implants are used in older, less active adults or in people with weaker bones. The recovery time for this prosthesis is faster than other methods.

The difference between the cement and uncemented version of the hip prosthesis is the lattice grid that comprises the socket part of the uncemented prosthesis. After the diseased bone and cartilage has been removed, the latticed grid is inserted into the socket. After a while during healing, the remaining hip bone will grow into the grid much like ivy grows into a trellis and suture itself to the prosthesis. The new bone grows into the implant, securing it in place. This is a much more natural cohesion and lasts longer than the traditional prosthesis. Also, it affords much more mobility to the active hip replacement recipient than the cemented type.

Scientists are currently in the process of developing joint replacement methods that will last much longer than the current prototype. While doctors now use a glue to bind the old bone with the new prosthesis, they one day hope to use ceramics as a bone substitute.

When a bone breaks in the body, the bone cells will form together to rejoin the broken bone. In the same way, bone cells can join with coral or ceramics forming one, continuous bone. While the glue or cement that doctors use will eventually deteriorate, ceramics will last much longer as they have better chances of being accepted by the cells. While recovery may take longer initially, the effects of surgery will last much longer than current replacement methods.

Scientists are now working on using ceramics and coral to be used as joint replacements in the future. Hospital stay after surgery usually lasts for five days. After the hospital stay, the patient will probably require the aid of a walker for a few days before putting full weight on the leg.

Do you Need
an Appointment?

Requesting an appointment is now easier than ever. Simply call our front office at (817) 335-4316 or complete the quick form below: